The Golden Retriever is a popular dog breed because of their friendly and gentle nature. You may have noticed that Goldens love chewing on things. Which could cause you to wonder; do golden retrievers bite?

Well, like most dogs, golden retrievers tend to want to chew on things. As these dogs were designed to retrieve game birds and have a natural tendency to bite and pick up things for hunters.

Golden Retrievers are gentle and don’t bite hard because their soft mouths were designed to protect the game birds when retrieving them.

On a scale of 1-10, the tendency for Golden Retrievers (and other dogs) to bite is very low. It’s probably less than 2%. Their sweet nature make it very unlikely.

Why would a Golden Retriever bite?

Golden Retrievers don’t tend to be aggressive dogs. They are easy to train and are good with children.

However, some situations can prove too difficult for dogs to handle. These situations below are what may cause a dog to bite and lash out.

Dogs can be overwhelmed by their environment just like humans. Parties, concerts, crowds, parks, and stores are all common places that can overwhelm dogs of any breed. Dogs can feel unsafe and stressed when there are many unknown people around. Particularly in crowded public areas.

Extreme storms can also cause dogs to become overwhelmed. You may notice your dog hiding under the bed or in another area during a storm. This is a sign that the loud, scary noises are overwhelming your dog.

When your dog hides during a storm, your instinct will be to comfort it by cuddling up to it. Although it might seem like a good idea, it could be dangerous and lead to you getting bit.

Even if they don’t intend to, dogs on edge are more likely to snap. In such situations, it is best to leave the dog alone and allow them to return when they feel safe.

What can you do?

You can calmly remove your dog from a crowd or party if they seem overwhelmed. Even if they are only going to be in the enviornment for a short time, it is important to take them somewhere safe and calm so that they don’t get too stressed out.

A dog feeling threatened is another reason that can cause a dog to bite. Dogs are not like us. Dogs are not able to think logically.

As humans, when we see the Amazon guy coming up to the door and we say, “Oh, my impulse purchases are here!”

A dog would consider Amazon as a perceived threat and treat it as such a thing. Which is usually why dogs will bark and growl at the sight of a mail carrier.

Golden Retriever owners that notice this behavior in their pup may attempt to intervene. They may try to yank the dog away if it starts barking or growling.This sometimes can lead to you being bitten.

Unknown territory can make a dog anxious. Although they might not feel threatened, being in unfamiliar territory will make them anxious. Uneasy puppies are those that give in to their instincts and will bite whatever it feels it needs to.

Unknown territory can be scary or mundane. You need to ensure your dog is comfortable when you go to unfamiliar territory. This will prevent aggressive dog behavior.

Dogs can’t hide their emotions like humans. You’ll usually be able to tell by the signs if a dog is on the verge of losing it.

Dogs’ ears can be a good indicator of their mood.

It doesn’t matter if the dog is feeling anxious, sad, or angry, it will immediately pull its ears back and down. This is done when the dog is preparing to fight. By pulling its ears closer to its head, an attacker can’t grab them.

It’s the same with their tail. The tail is placed between their legs to protect themselves. Dogfighting circles tend to crop the tails as well as their ears. Sometimes it may not be possible to see the tails of certain dog breeds. Luckily Golden retrievers have a tail that you can see.

Most dogs will often growl and show their teeth when they sense danger or are overwhelmed. This is done to let potential attackers or defenders know they have teeth and aren’t afraid of using them! It’s often enough to repel the threat completely. It’s almost like grabbing a gun whenever you feel threatened. It is important to make the attacker question whether it is worth the risk. How to stop Golden Retrievers from Biting

While a nibble might be fine for you, a full-blown bite could cause you harm. This is something you should address, especially if you have children in your household.

These tips will help you train your Golden Retriever puppy not to bite:

Most puppies will grow out of their puppy biting phase and develop impulse control. This can be prevented by being able to manage it sooner rather than later. This issue usually resolves itself within a few days.

When will a Golden Retriever stop biting?

Biting is a common behavior in golden retriever puppies since they love to nip and chew. This helps strengthen their gums, and teeth and burn excess energy. Especially at a young age they will nip, bite and lick as part of their hunting play and development. Golden retrievers were originally bred to be game dogs so biting is also a part of the dog breed.

Although it is adorable to see your golden retrievers bite and nip, you shouldn’t encourage this behavior. Unchecked biting as a puppy may lead to injuries and aggressive behavior in adult Golden Retrievers. Your pup will not be able to bite very hard until it is 8 weeks old. The socialization process will teach puppies that bites can have consequences.

Puppy bites be a problem when they are between 8 and 12 weeks of age. To prevent the habitual behavior of biting, it is important to stop them from doing so.

Conclusion on do Golden Retrievers bite?

Golden Retrievers can be cute and fluffy. They are easy to train, easy to love, and easygoing. Like all dogs, they can bite, even though they are gentle and sweet.

Do not panic if you are bitten. This will only escalate the situation and cause more injuries. Calmly ensure that the dog is safe and go to the bathroom to address any injuries. You should never reward negative behavior. However, you shouldn’t be too harsh or upset.

Goldens will sometimes “play bite” as they want to play and are full of energy. Make sure your Goldens get enough exercise and keep them entertained with lots of toys! 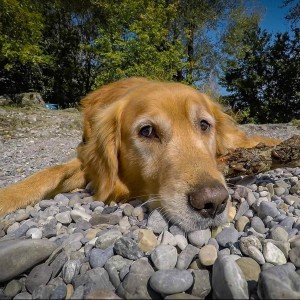